In May 2010, I met Margaret Lim, a Malaysian-born Canadian children’s book author, while we were waiting to be made-up for our TV appearance on Kuppa Kopi, a talk show with Sharnaz Saberi.  We exchanged books; in fact she generously gave me all four of her Payah books.  She autographed them for my two children Jason and Justin.


Afterwards we went out for tea.  Her son asked me to give her a ride while he picked up another friend and the four of us spend the afternoon getting to know each other while talking about books and blogs and exchanged tips about Sarawak.

Later, while watching myself and Margaret Lim on TV1 (her segment followed mine), my son Jason, who was six at the time, pointed to the TV screen at Margaret Lim’s children book series about Payah, and said, “Daddy, that’s my book!”  He called over Justin, who was three and a half, and they both stood in front of the TV, excitedly pointing at their four newest books.

“Is that the woman who gave me the books?” Jason asked me.

He studied her with awe.  I’m sure he’s going to remember Margaret Lim and that moment for a long time.  But me, I’m just his daddy who happens to be a writer, though I was also on TV—not that he gave a hoot!  In fact he and Justin were both upset with me for changing the channel until he noticed Margaret Lim’s books were on TV.  The power of books!

The following May, I was sad to hear that Margaret Lim Hui Lian had passed away from cancer.  Although we had kept in contact via email and commented on each other’s blogs, I never saw her again.

Her Payah series, however, still live on in our house.   In fact, I made this past week Margaret Lim week!  I had Justin, now ten, reread the books (he’s the reader in the family and had read them before, even though they were meant for child­ren age 12 and above).  I then had Jason, who turned thirteen, read all four of the books to me while I drove him to school (he’s now in Form One, attending the afternoon session), while I reread all four waiting for a couple of doctor’s appointments—I was glad I had them in the car!  I had also read them to the children seven years ago.

The Payah series, consisting of four hard bound books, were based on recollections of Margaret’s childhood, which she spent with the native people deep in the interior of Sarawak on the Island of Borneo.  The books were beautifully il­lustrated by her daughter Su Jen Buchheim and published by her own company Fairy Bird Children's Books, where I believe they can still be ordered. 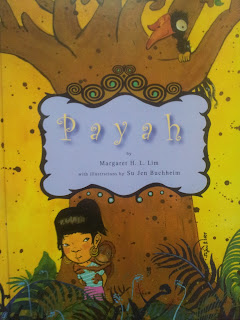 The Borneo Post called Payah, “A uniquely Sarawakian children’s book that will fire a child’s imagination. A must read for all!”


Payah
Payah is about a fearless Kayan girl called Payah, who has a soft heart for small helpless crea­tures. Deep in the rainforest of Sarawak, Payah rescues a hornbill and a mouse deer, while still taking care of a baby orangutan.

Four Eyes
Payah makes a surprising discovery, and takes on a responsibility that becomes almost too much for her to bear when she befriends a run-away.

Precious Jade and Turnip Head
Payah celebrates Chinese New Year with her classmate, Precious Jade, and her little brother Turnip Head, who keeps getting himself and Payah’s friend into trouble.

Nonah, or The Ghost of Gunung Mulu
Payah befriends Nonah, after she joins her parents who teach in the rainforest.  They win a trip to Mulu Caves, where they help to unravel a plot to steal rare orchids.

Thank you, Margaret, again for your precious books, a gift that our family will continue to treasure. I’m sure when Jason and Justin grow up and have children of their own, the Payah books will be waiting for them.  In fact, I’ll probably be the one who’ll introduce them during another round of Margaret Lim week…

*Here is an updated website created in the memory of Margaret H.L. Lim, called Maggie’s Books and Recipes.

June 2018 Update- ebooks!
Interview with Golda Mowe, author of Iban Dreams and Iban Journey, another Sarawakian writer who has also written a book for children.

“The Musical Tree” published in French!


“The Musical Tree” was just published in French, on editions GOPE website.  Editions GOPE is my French publisher for Trois Autres Malaisie, the French translation of Lovers and Strangers Revisited.  They are doing a series of short pieces by their authors on Southeast Asia, their specialty.

Here is the English version of “The Musical Tree”:

We stopped at a shady area serviced by several hawker stalls and drank from coconuts. A dozen cats lay around in idle repose while wait­ing for their next meal.  A white cat climbed onto a chair vacated by two Malays and put its paws on the table to sur­vey the left­overs.  A mewing gray kitten waiting below asked it to hurry up.
A strange looking tree caught my attention.  Then I realized it wasn’t a tree, but a com­posite of two trees.  The one on the inside was old with a dark knotted trunk, while wrapped around it was a younger tree with light, smooth bark.  The upper branches of the two trees were so inter­twined it was difficult to distin­guish one from the other.
I pointed it out to Jeya, who was eleven years old and had befriended me.  I asked her about it.
“Oh that.  That is a musical tree,” replied Jeya.
“A what?”
“A musical tree.”  She finished her coconut and said, “Come!”
She led me to the tree and asked me to sit on the seawall beneath it.
“Now listen.”  She cupped her ear.  “Hear it?”
Dozens, if not hundreds, of birds were singing all at once, a symphony in full swing.  I closed my eyes as I listened to the magic.
“You can hear them, but you cannot see them, am I right or not?”
The foliage was so dark and dense, it was impossible to see anything.
“It must drive all the cats crazy,” I said.
“Cats are crazy,” replied Jeya, and laughed.  “Every day the musical tree comes alive.  Every day a free concert.”
Two of Jeya’s classmates waved as they passed by.  She scampered off to join them.
Already I was missing Jeya’s company….The longer I sat under the tree listening to the birds, the lonelier I became….A young Malay couple walked by holding hands.  The boy said some­thing to the girl and she boxed him on the arm.  He grabbed his arm and feigned pain.  Both of them laughed.  She hit him again.  They were young and in love, just starting out in life.  In com­pari­son, I felt old—not yet thirty but already facing divorce.
A Chinese derelict reeking of alcohol and urine sauntered over, uninvited.  He sat down beside me and eyed the driftwood between us.  I tried to ignore him, expecting the dere­lict to hit me up for money.  Why were children so giving, and adults, demanding?
“You like the birdies?”  He pointed up at the tree.  “The birdies sing for themselves, you know.  They sing ‘cause it makes them happy.  If only people could sing without needing some­­­­­­­­­­­one to hear them they might be happy, too.”
A black cat stirred.  It paused in mid-stretch to look at me.  The cat began to walk away.  Again it paused as if to see if I were coming.  I excused myself from the derelict and fol­lowed the cat.  It seemed to know where it was going.  For now that was good enough for me.
#  #  #

For those who read French:  Book orders for Trois autres Malaisie.    E-book orders.
Here's a link to the intro and excerpts, and to four reviews of Trois Autres Malaisie in eurasie.net, Malaisie.org, easyvoyage.com, and Petit Futé mag.

Here’s also a link to my Maugham and Me series (in English)  that I wrote when asked to take part in a French documentary on Somerset Maugham which was recently aired on the Franco-German cultural channel Arte on 5 June 2017 and still can be viewed here for another week or so before Arte takes it down from their website...