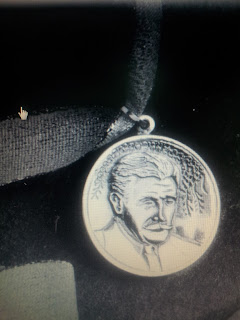 Congrats to the winners of the 2015 William Faulkner - William Wisdom Creative Writing Competition.

Novella:          The Virginal Grip by Paul Negri
Runners-up:   Apple Tree, Michael Caleb, Australia
Breeding in Stockholm, Stan Kempton, New Orleans, LA
Novel in Progress:  Search a Dark and Empty Place, Emily Capdeville
Runner-up:            An Inventory of Lunatics, Jacob Appel
Tough luck for Jacob Appel who was runner-up in both the Novel and Novel-in-Progress.
As for The Girl in the Bathtub, a sequel to A Perfect Day for an Expat Exit, also set in Penang, Malaysia, it remains as a finalist in the novel category.

Posted by Borneo Expat Writer at 4:36 AM No comments: 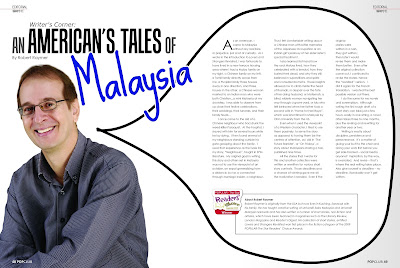 Feel proud to be featured in POPCLUB this month, a magazine that's exclusively for Malaysia Popular (bookstore) card members.  I was featured their once before back in 2009, though they had me looking the other way! 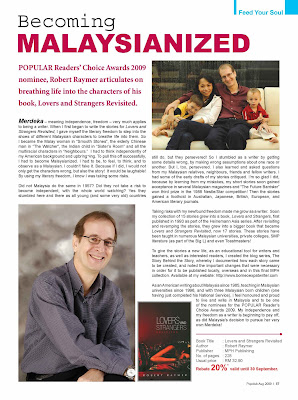 Here's a link to the recent KL Bookfest Workshop that I did with several other writers for Popular in July.

Here is also a link to Lovers and Strangers Revisited -- 20 years!

Hmmm...with the 25-year anniversary of the original publication of Lovers and Strangers by Heinemann Asia coming up in 2018, perhaps, with the help of MPH, we can do a big push to get this collection published in other countries and also translated into other languages other than French....The individual stories have been published over 80 times, the last publication being "Dark Blue Thread" in Australia's Westerly 2011.  Then "Home for Hari Raya" was filmed in 2013 by Ohio University.  Would love to have this collection taught in the US and other countries at various Southeast Asia programs.  "Home for Hari Raya and "Only in Malaysia" were taught at Ohio University in 2012, and many of the stories, including the collection has been taught in several universities and private colleges in Malaysia and for six years "Neighbours" was taught for SPM literature.  There has been some interest before, and I just recently revised all of the stories, which I did for the French translation, too, to make them even better, so let's see what happens...

Again I want to thank Popular for inviting me to the Bookfest and for featuring me in this month's issue of POPCLUB and for having the Popular-Star Reader's Choice Awards, which made it possible for Lovers and Strangers Revisited to win back in 2009!

Here are links to four of my author to author interviews of first novelists:

Posted by Borneo Expat Writer at 9:07 PM No comments: