The Power of Five is Working!

I once published a blog (which I later turned into an article for Quill) titled “Small Increments, Big Results”.  This is exactly what I had in mind for The Power of Five, and it’s clearly working.  If I don’t get my quota of sending out five things a day, on top of everything else, I feel guilty.  Guilty in a productive way!

About six weeks ago I made this commitment to sent out five things every day during the week, whether I’m submitting short stories to literary markets in the US, or pitching article ideas, or sending revised/overhauled articles as spec, as I did this week to The Writer for that very same article.  I also, finally, wrote to some agents, something I had been procrastinating on for months; I wrote to them about various projects, novels, screenplays, and even children books!

After another revised blog-cum-article this week, “Are You Writing or Creating Assets?” I got to thinking, what other writing assets do I have?  Then I remembered, didn’t a write a couple children stories seven or eight years ago that never got sent out?  So I dug them out and dusted them off inside my computer.  Even test-marketed one by reading it to my children.  The fact that it lacked illustrations didn’t exactly help.  Seeing that they weren’t really paying attention, I overhauled the story and sent them both out.

Without The Power of Five, another seven or eight years might have gone by.  The point is, The Power of Five is making me see marketing possibilities.  Each day I’m thinking, OK, what can I send out?  What unfinished articles or stories can I resuscitate from the dead?  Sometimes, as it did this week, it made me do a lot of unplanned rewriting and editing, but then, I had been meaning to get around to these for quite some time.  Before, there was never an urgency—other than to pay the mortgage on our house.   But now it’s like, oh my god, what am I going to send out today to meet my quota?  The cool thing is I don’t often stop at five, as I did those last two weeks of September.  I look at the time and think, can I squeeze in another?

Six weeks might be too soon for some to call this a habit, but if I keep this up, week after week, month after month, I’ll surely see the results in both my self-esteem (it feels great to keep your own commitments!) and my bank account.  I'm also finally, slowly, catching up on a lot of work that I had been letting slide, and that feels good too!
-- Borneo Expat Writer

Beheaded on Road to Nationhood: Sarawak Reclaimed—Part I
.
Posted by Borneo Expat Writer at 2:28 AM 2 comments:

Email ThisBlogThis!Share to TwitterShare to FacebookShare to Pinterest
Labels: beating procrastination, blogging leads to saleable articles, keeping your commitmenrts, The Power of Five

Talking About Books in Singapore 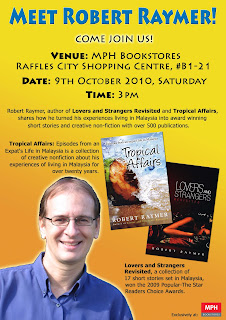 After arriving in Singapore that morning and finding a place to stay, I made my way to the MPH bookstore at Raffles City.  Not wanting to be late, I found it a lot faster than I expected.  In fact, I arrived an hour earlier than requested.  Everything was already set up, with large poster greeting visitors near the entrance, plus two smaller posters (one on the table, one on the opposite shelf at eye level) that announced "Calling All Fans of Robert Raymer!  Promotion valid from 9-15 October, 20% off on Lovers and Strangers Revisited and Tropical Affairs!"  Tiffany and the store manager did a great job to make sure everything was perfect.  In fact, I would be the first author speaking in this store, so they were keen to make it an success.  The location was less than ideal and they had poor window exposure to display books.  In fact, you can't see the store unless you walk right by it and if you're not paying attention, you could miss it entirely! 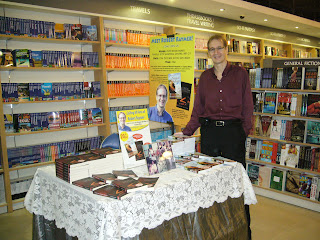 Here's me with a poster of me.  Visitors would glance at the poster, then at me, and give me this double take. 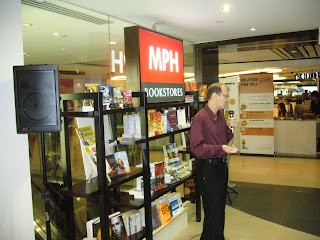 This shot with the MPH sign was taken at the beginning, as I was testing the mike. 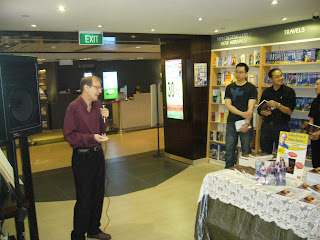 Because of the narrow entrance and where I was standing, it was hard to focus.  I had people to the right of me, inside the store, those in front of me, and then people started to gather to my left.  Plus further away, people would linger outside the bookstore as they passed by, curious to hear someone speaking about turning their experiences into books.  To make eye contact, I had to swivel around 180 degrees from left to front to right.  All in all it went fine, signed a few books.  One Australian was so keen to see me that he came a day early on Friday, not realizing until too late that I wouldn't be speaking until Saturday.  He came early on Saturday, too, so we had a long chat before my talk.  He was keen on writing about his experiences living in Singapore, but didn't know how to start. I was his perfect solution.

While I was there I picked up A Warrior's Life, a Biography of Paulo Coelho by Fernando Morais, which I thoroughly enjoyed and recommend.  It shows you what is possible once you make the commitment to actually do some writing as opposed to merely wishing for it to happen.

Beheaded on Road to Nationhood: Sarawak Reclaimed—Part I
Posted by Borneo Expat Writer at 7:48 PM No comments: