Arte: Watching the French Documentaries on Maugham, on Pepper, and on Peter’s Personal Invitation.


While watching the French documentaries that Laure Michel and Richard Cloue did for the Franco-German cultural channel Arte on Somerset Maugham, on Sarawak Pepper, and on Peter John Jaban’s Personal Invitation on the upper Sarawak River, I realized that the vast majority of the footage they had shot was left unused.  There is only so much footage you can use when there is a severe time restraint.  Something has to go—often 90-95 percent! 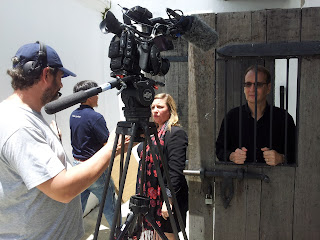 They even cut out the jail sequence!

Of course what’s also missing are the behind-the scenes drama that I had blogged about in my five-part series Maugham and Me:  whether to shoot at Fort Margherita or the jungle; whether they could film me inside the jail; whether my house would be suitable for filming (and when and how many were coming!); whether the rain would stop so they could finish Peter cooking in bamboo at the edge of a river; or whether there was enough daylight to finish the Maugham shoot. 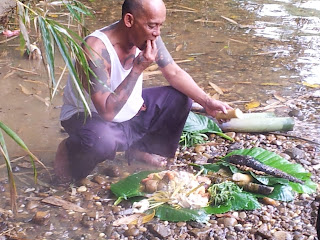 Then there was Michel Viet losing his drone (and could they find another before he returned to France), plus his jumping into the bloated river in a gallant effort to save the drone (plus all that great aerial footage) at great personal risk to himself.

Then came that somber, drone-less ride home in the longboat before Richard decided to liven it up with some photos of us. 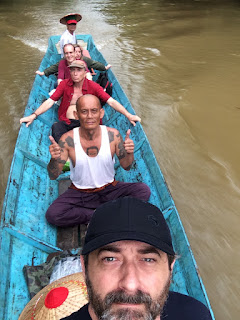 Also missing for Laure and Richard were all the weeks, months of hard work, the advance planning, the preparations, the travelling to Malaysia and Borneo, and the post production work of putting it all together and making difficult decisions:  what to cut, what to leave in, and the sequencing to make the documentary easier to follow and entertaining for the viewers.

Of course, if this was an hour program, they could cram everything in, but all that footage from three separate venues in Sarawak (and outtakes in the jungle), plus Kuala Lumpur and Malacca, in the Maugham story alone, had to be compressed into a little more than 12 minutes!

Because the programs were in French—unless you speak French—it was difficult to follow what was being said in English since it would get drowned out once the French translation kicked in.  Still, in any language, it was visually stunning to watch and fun for those of us involved, to see how they pieced together each documentary.  In Sarawak they shot three in five days, and on one day, they worked on all three!

Naturally, I enjoyed watching myself (I come in around the 10 minute mark, but I kept wondering, did they cut me out altogether!) and then seeing my wife (the boys got cut) and others that I recognized.  Hey, that’s Bernice!  And Serge!  Then from the other films, there is Karen!  And Peter!

As I watched the Maugham story unfold, I kept looking to see how much footage they actually did use. I especially wanted to see if that sunset through the jungle on the upper Sarawak River at Kampong Git that had so mesmerized us had the same magical feeling on film or if they even included it!  They did, but the real magical part, that red glow through the jungle was too dark to film.  Richard, who was further back, did manage to shoot it above the jungle or was that the sunset from the previous evening?

Still, what a wonderful feeling to be a part of such a cross-cultural experience—from France to Borneo—that came right out of the blue and ended in that stunning sunset along the upper Sarawak River.

Below I posted the links to all three films, though I was told that the films would only be avail­able on line until early August ’17, so if you come upon blog later than that, the links may be gone (though it might be available elsewhere will some diligent googling). For now enjoy:


Beheaded on Road to Nationhood: Sarawak Reclaimed—Part I

Beheaded on the Road to Nation­hood—Part II