Beheaded on the Road to Nationhood: Sarawak Reclaimed—Part II


After being beheaded as Alan Lee  in the documentary Road to Nationhood: Sarawak Reclaimed by Rentap and his war party, my head didn’t hurt, nor was there any swell­ing, but I could really feel the pain in my ribs that night—I must’ve bruised or cracked one when I fell several times while being killed—which made it difficult for me to sleep.

Back in my twenties, I cracked a couple of ribs after getting kicked in taekwondo, so I knew there wasn’t a whole lot a doctor could do except X-ray it for confirmation and give you something for the pain.  They used to wrap your chest but they stopped doing that decades ago.  The pain was manageable; it only hurt when I laughed or slept or rose from sitting, so I opted not to see a doctor, but I did need to repair my black leather shoes.  Maybe from all of the falling or banging it on the short steps at the Iban Long­house, the sole in front started to come off.

Since I was not needed until Saturday, my big day where I was to play several characters—the Governor of Singapore; John Brooke, who had been passed over in favour of Charles Brooke as the second White Rajah; and the younger version of Captain Henry Kep­pel, a British naval officer who had served in the Opium War and assisted the first White Rajah James Brooke’s campaign against the Borneo pirates and Iban warriors—I had plenty of time to find a shoe cobbler to fix the problem. 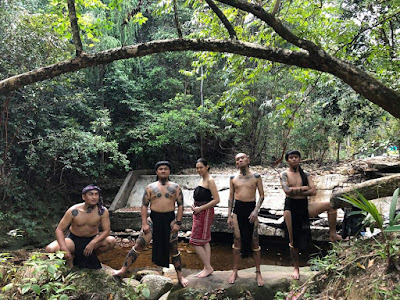 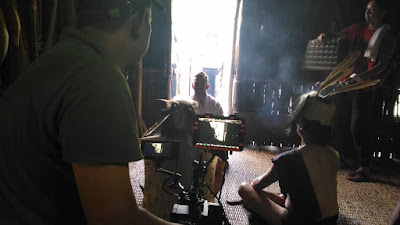 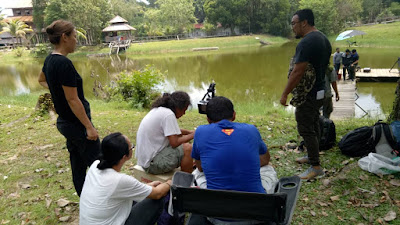 Throughout the day, I kept receiving photos of the shoot being posted on the WhatsApp Group.  Some made me pause and wonder because they looked like my scenes.  I knew there had been some changes on the shooting schedule, so I double checked Friday’s call sheet to make sure my name was not on it.  I thought, perhaps, I had overlooked it.

Late that afternoon, I got a message from Mark to confirm that I needed transportation for Saturday.  Then two hours later, Prisca contacted me and asked if I could drive out to the Sarawak Cultural Village on my own.  Seems there was a problem with the tide for the boat scene and they needed to start shooting a lot sooner than planned.  I needed to be there by 6:30 am, which meant I had to get up at 4:30 am if I wanted to make the 50 km journey from my house on time.

My wife told me to take a new shortcut to Damai, via Pending, the opposite way we nor­mal­ly took, via Satok; both would head north on the other side of the Sarawak River.  Last night it had rained and was still drizzling when I arrived at the Bidayuh Longhouse, the new base of operations at exactly 6:30 am—without getting lost, surprising my wife. 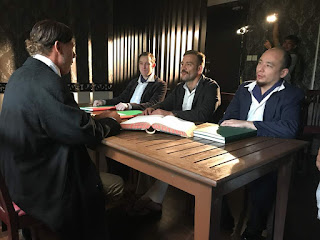 I was told that all of the afternoon shoots had been cancelled, confirm­ing my suspicions.  Since yesterday, Friday, was a public holiday, the staff would not be around at the Bishop’s House, so they decided to create the shots they needed at the Sarawak Cultural Village using two other Caucasians, the Fort Guards, Alex and Charles for the Governor of Singapore and John Brooke. 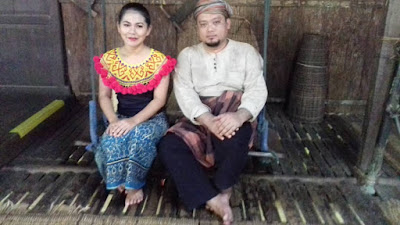 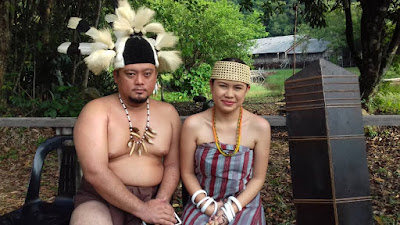 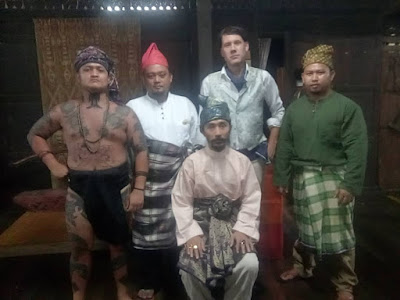 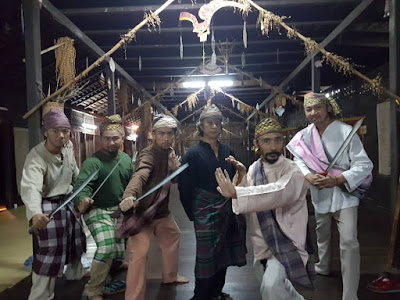 Swapping roles at the last minute was quite common.  Sometimes, someone couldn’t make it for the shoot, so they would grab whoever else was handy; others, as requested, sent a re­place­­ment for them­selves.  Jimmy, one of the extras, told me that he played nine roles.  A little makeup, a change of costume, and he could pass for one race or another.  Others played at least five or six roles, one or two primary, up-close shots, and the rest secondary to fill out the numbers. 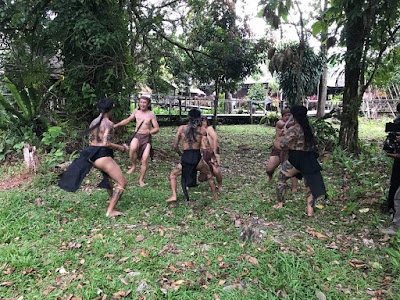 For the battle scenes, which took place last night, they made about a dozen peo­ple look like a hun­dred, taking multiple close-up shots from different angles, catching various parts of their bodies.  Those working on the actual footage reported how impressed they were seeing it on film. 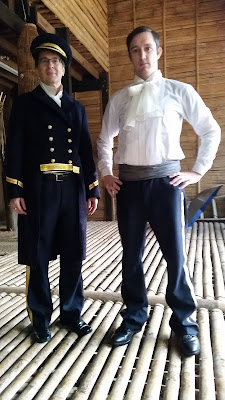 After we were dressed in our costumes, they drove Alex, who was to portray the 14-year-old Charles Brooke, and me, as the younger Captain Henry Keppel, to a nearby jetty in Santubong where we boarded a fishing boat with a trimmed down crew.  Altogether, including the director, Fendi, and Rob, there might have been eight or nine of us.  Since it looked like it was going to pour anytime soon, we were all in a rush to get set up and to start filming. 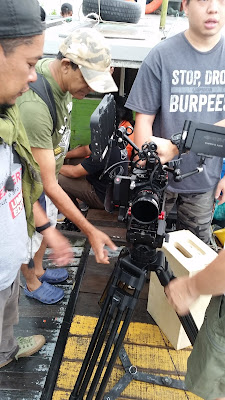 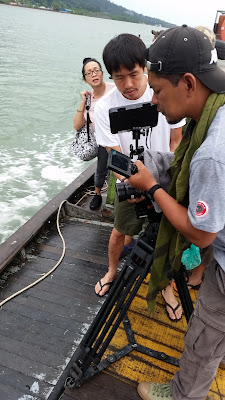 They had Alex and me stand at the bow, looking off to­ward our left, with the camera posi­tioned behind us, shooting us, the sea and the black­ening sky assuring us that a storm was approaching. 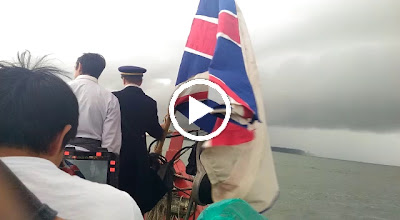 While filming, I explained to the young Charles Brooke, the future second White Rajah of Sarawak that someday, all of this would be his….It was Charles Brooke who greatly ex­panded the territory of Sarawak beyond the original city of Kuching to its present bor­ders. 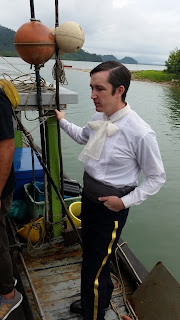 Luckily for me, I wore a hat when it began to drizzle; unluckily, the British flag that they had mounted kept pushing at the back of my head nearly knocking the hat off before they tied the flag down.

To get the angle they were looking for, we had to kneel on the deck, with our backs erect.  The position was uncomfortable, so we were glad when the director suggested that we re­move our shoes, which helped. 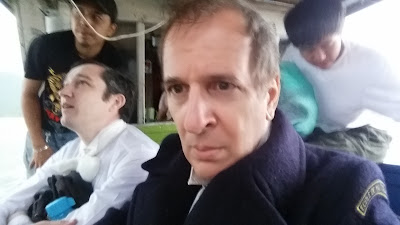 Later, when it began to rain heavily after the shoot­ing, as I was rushing for cover, the hat flew off my head, but I somehow managed to catch it midair before it was lost forever at sea.


I had planned to get some shots of the fishing boat that we had used but the heavy rain pre­vented me from doing so; I wished I had taken the shots before boarding but we were in a rush to beat the rain....Alex and I returned to the Bidayuh Longhouse, while the others stayed behind to shoot more river foot­age.


They then spend the rest of the day and the follow­ing day taking B-roll shots—out­takes with­out actors—at notable sites such as Fort Mar­gherita, the Istana, the Courthouse, and other historical buildings, and the surrounding envi­rons to work into the documentary. 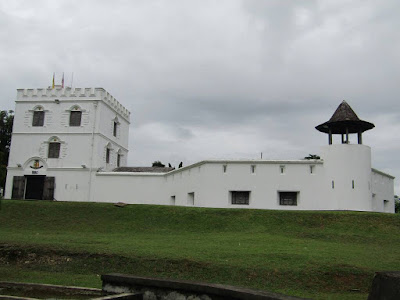 The A-roll shots are the main scenes with the actors and extras, the most costly part of the filming, which is why they try to cram it all into several long days for documentaries or a few intense weeks for feature films.


Before leaving Kuching, Rob managed to have tea with Jason Brooke, grandson of the last Rajah Muda of Sara­wak.

Even though the rescheduling of the shoot made me miss out on some important scenes, including having a private tea with James Brooke as the Governor of Singa­pore, no doubt suggesting that he seek his fortune in Borneo, I was quite happy to keep my head about me at all times, just in case someone decided to, well, you know, this is land of the headhunt­ers, and that Iban war party did kill me in that other scene…

It was also quite an honor to be a part of recreating his­tory—an honor for all of us involved from the cast, the crew and production—in the Road to Nationhood: Sara­wak Reclaimed.

Beheaded on the Road to Nation­hood—Part II