Finding Stories in Your Backyard 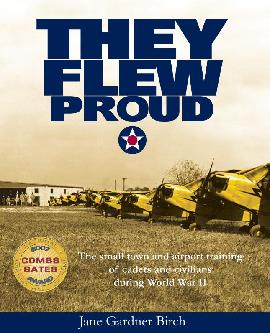 My father sent me a book.  His book.  No, he didn’t write it, but he’s in it.  A lot.  He even got a chance to sign autographs, and they posted him on YouTube!   When the book came out he was 81 years old.  It’s the first time he sort of felt like a celebrity.  I’m happy for him.  Seeing him on YouTube made my day.  I called him up and had to explain to him what it was.  He had no idea; doesn’t own a computer. Doesn’t understand how it’s possible that I saw a video of him a day after I finished reading the book. (I contacted the author, went to her website and clicked on it.) But that’s okay.

The author of They Flew Proud, Jane Gardner Birch, found her story in her own backyard.  Basically it’s a book about her father, but oh, it’s much more than that!  In the acknowledgements she wrote: “Until three years ago, I had no knowledge of the Civilian Pilot Training Program nor did I know the Boards existed (the names of those like my father who learned to fly solo from May 17, 1944 to July 17 1948).  All I had was one photo of my father in a military uniform and a child’s memory of an airport.  That doesn’t make a book…”

But she took the story of her father and made it a part of an even bigger story, the 1940’s in the US, about the men and women in small towns who not only learned how to fly but also who became the backbone of this country for the sacrifices they made to support the war efforts by working in factories and by going off and fighting in World War Two, a time that so many of us know so little about.

In the forward it states: "...Now we have Jane Birch’s They Flew Proud, a crisply told account of her father, Gardner Birch, his fellow pilots, and their involvement in the CPTP-WTS course of training at Grove City College, in Grove City, a small town in western Pennsylvania. Ms. Birch has done a remarkable job of piecing the story together so many years after the fact. She deserves a great deal of credit for what obviously has been a labor of love, a resounding tribute to her father and his love of aviation, and a reawakening of formative childhood memories."

Grove City, Pennsylvania is where I was born.  Grove City College is where my grandparents and my brother attended.  Grove City is also the setting for my short story “Waiting for My Father to Crash” that I wrote after my first visit home after three years of living in Malaysia, published in both Silverfish New Writings 5 and 25 Malaysia Short Stories, Best of Silverfish New Writing 2001-2005.  Basically it’s about my father who nearly crashed his plane, a Piper Cherokee.  Four years later, my father did crash that plane.  The engine died, and he knew he was going to crash but he was smart enough to find a back road and was lucky enough no cars were on it, and he brought it down onto that road.  He was thrown out of his seat and a wing was torn off.  But at age 65, he was able to walk away from that crash.  He never flew again.

But now he is, thanks to this book, at least in my memory of all those flights that he took me with him, including the time we flew into the airshow at Oskkosh, the biggest aviation event in the US. (Check out the photo of the author Jane Gardner Birch at Oshkosh with, yes, that really is Harrison Ford.

They Flew Proud even went onto win the Combs Gates Award, which is presented by the National Aviation Hall of Fame (NAHF), located at Wright Patterson Air Force Base, to honor a project which best promotes or preserves America's air and space heritage.  Not bad for a book that started out with a few questions about her father.

Thank you, Jane Gardner Birch.  By writing about your father, you wrote about my father, too.  You wrote about a lot of fathers and mothers who learned how to fly and how to survive WWII.

So what stories are in your back yard?  I bet if you looked around you might find something that raises a few questions in your mind.  Who knows, if you did a little research you might find an even bigger story, and possibly a book that only you can write.
*Here’s a link to the other pilot interviews including a longer segment of my father, Bill Raymer

** This is a link to another story involving my father, the day his own father was killed by lightning.