Writing a Novel, Running a Marathon, and Advice from Dory 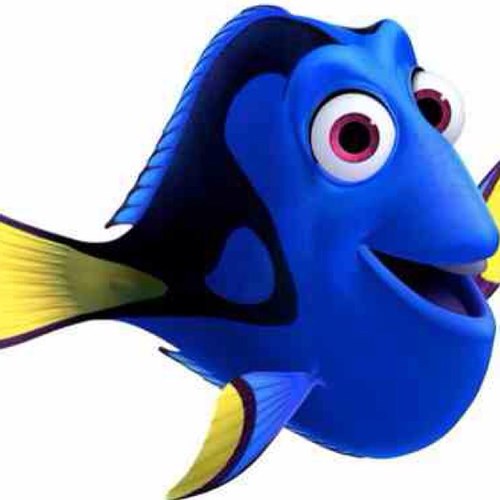 Having recently entered five novels into the 2016 William Faulkner - William Wisdom Creative Writing Competition in mid-May, I was determined to start a new novel in June and then run a third marathon in August.  Last year one of my novels was a finalist for their 2015 contest, one of four novels that have been finalist or short-list finalist for Faulkner-Wisdom Novel Competition.

After a marathon performance of rewriting those same four novels for this year’s contest, plus adding a fifth novel that I adapted from a screenplay, I was determined not to let up.  I’m not getting any younger.  I was equally determined two years ago to run my first marathon (for the same reason).  My wife told me I was crazy.  So I ran a second marathon last year to prove that I was crazy.

I admit rewriting five novels back to back is extremely crazy, but what to do?  I want to win and I want all five novels published and when it comes to fiction there’s always seems to be room for improve­ment.  But after all of that editing and rewriting (1,568 pages since I went through each novel twice, so it’s actually 3,136 pages that I also read out loud), and then to start in on a sixth novel so quickly?  That’s just plain insane.

Okay, I did take two weeks off to write to some agents and to rewrite some short stories….But I was itching to start on that new novel.  Fortunately, I wasn’t starting cold, which can be daunting.  For two years I had been keeping notes and have about 200 notebook pages, plus a pile of loose notes that I’m now typing up and tossing into four sections:  Part I, Part II, Part III and Not Sure Where the Hell it Goes.  Hopefully, I’ll figure out that last section later…

Writing a novel, by the way, is like running a marathon.  First you have to show up at the starting line raring to go...after mentally and physically preparing yourself for the insanity.  Once you show up, you got a fifty-fifty chance of completing it so long as you follow Dory’s advice from Finding Nemo and also Finding Dory, “Keep on swimming.  Keep on swimming.”  Unlike a marathon which you can complete in several hours, you got to show up at the starting line of your novel in front of your computer day after day, week after week, month after month.

That often means gluing your butt to the chair so you won’t get up every five minutes to look for a distrac­tion.  Besides you got plenty of distractions in front of you – the Internet, email, social media, not to mention all those other temptations a click or two away, like checking your likes or messages on your phone.

Once you complete that first draft, regardless of how bad or good you think it is, you have to do the same for the second draft, so “Keep on writing.  Keep on writing,” though mostly you’re rewriting….Writing a second draft often feels like running a second marathon right after you finished the first, regardless if you’re too tired, not in the mood or still suffering from cramps.  I waited a whole year to run my second marathon, so I know what that feels like.  By the way, no matter how many marathons you run, you still got to cover 26 miles and 385 yards or 42.195 kilometers or in other words,you got to "Keep on running.  Keep on running."  Being familiar with the landscape does help.  This also applies to writing that second draft.

Still, you got to keep showing up at the starting line as you plow your way through it, mile after mile, chapter after chapter.  The third draft feels like a half-marathon since you can reach the finish line a lot quicker assuming you put the hard work into the previous two drafts.  Slop­pi­ness and shortcuts will only slow you down in the long run.

Unfortunately you’ll probably need a fourth and a fifth draft (and a whole lot more races to run) to get the novel cleaned up and whipped into shape, so “Keep on re­writing.  Keep on rewriting.”

Before you know it, you can see the finish line ahead of you.  Now you can start entering it into contests to see how it stacks up to the competition.  If you’re not making it to the semi-finals nor the finals, you got a lot more work ahead of you, so hold off before you submit it to agents let alone publishers.  Later, after you polish it up and after others have read or edited it, you can always self-publish it yourself if only to test the mar­ket and to prove to yourself and friends (and major publishers) that you have a novel that’s worth looking into.

By then, you’ll no doubt have other ideas and plenty of notes for future novels that you’ll be eager to start on.  You know the mantra.  You suck it up and just like Dory, “Keep on swimming.  Keep on swim­ming” until you arrive.
--BorneoExpatWriter

Here's is the link to my third marathon (2016 Kuching Marathon)
Posted by Borneo Expat Writer at 9:18 PM No comments:

Writer Finds Inspiration during Writer’s Workshop and Turns it into a Book! 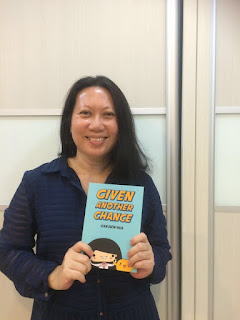 In April Dr. Gan Siew Hua, recently featured in The Star with her first book Given Another Chance and one of my editing clients, happened to be in Kuching for a research-related workshop, so I had the chance to catch up with her.  I first met Dr. Gan at last year’s Popular Bookfest Writing Workshop in Kuala Lumpur.

During my presentation, I gave participants a series of starter ideas to get them thinking about their own stories; then later, in the afternoon session, I made every­one write for about forty-five minutes (and went around the room to make sure they got their money’s worth!)  Dr. Gan wrote a first person narrative about a near-drowning-out-of-body experience titled “Given Another Chance.”

After the workshop she approached me about editing her work.  For the next several months, as she wrote story after story, I helped her with the editing and the crafting of her insightful first-person experiences, many inspiring and very courageous, to make them more effective.  I knew she was onto something special and that this could lead to a book.  I was hoping she would wait and add more stories to make the book longer, but like a lot of writers, she was in too much of a hurry (we’ve all been there), so I was doubly impressed that before the year was even out she had found a publisher!

For writers who are inspired by her story (from workshop to published book in ten months!), a word of caution.  Please don’t rush to the first publisher that catches your attention or who approaches you via the internet – calling all writers!  Sometimes writers are in for a rude awakening when they discover there are hidden costs that they hadn’t bargained on.  Some publishers are traditional publishers and are more discerning about the quality of the books they publish, others are solely for self-publishing, often called vanity presses, whereby they publish anything (with little or no editing) since you’re paying for it and then you’re on your own!  Others are hybrid and give you a range of options depending on your budget and includes distribution to leading book­stores where readers can find them.

Do take time to read the fine print and don’t be rushed into signing a contract without checking the publisher out, which is easy to do these days via the internet or looking at their final products in bookstores or even con­tacting some of their authors to see how satisfied they are.  Make your first publishing experience a rewarding one! 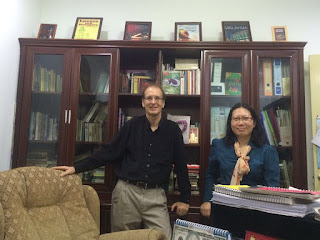 One smart thing that Dr. Gan did, as many writers have done before her including those who had already published a book, she sought out a capable editor, one that she trusted, and it was an honor for me to work with her.  I do know she has a lot more books inside of her!  And, yes, she is coming back to this year’s Popular Bookfest Children’s Book Writing Workshop 4-5 July along with one of her daughters.  I’ll be there, too, to help others to write and hopefully publish their book.

So if you think that someday you or someone you know wants to write, a good place to start is by attending a writing workshop – it’s not all work, plus you’ll pick up creative tips on getting started and inspiration from other writers.

—Here’s a link to a blog that I wrote about publishing in Malaysia/Singapore nearly a decade ago, with some updates and tips about promoting your book!
Posted by Borneo Expat Writer at 6:49 PM No comments: 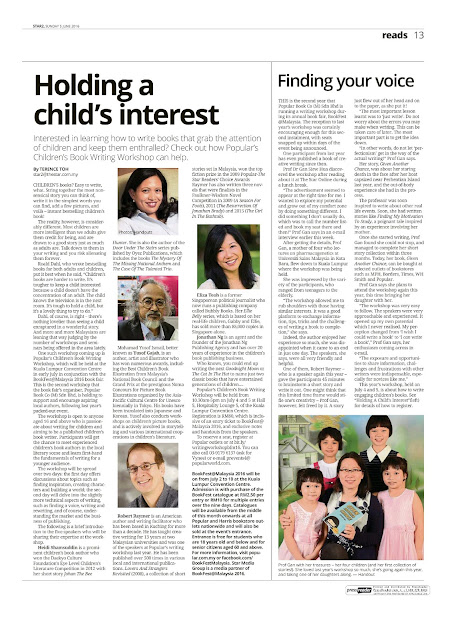 Also a link to to my recent five-part Maugham and Me series about being filmed for the Franco-German channel Arte in 2017.


-- BorneoExpatWriter
Posted by Borneo Expat Writer at 9:57 PM No comments: