The Lonely Affair of Jonathan Brady, one of three novels that I had entered for the 2010 Amazon Breakthrough Novel Award, has made the Second Round! They had 5000 entries for each category and cut that down to 1000 (I know still a long way to go!). The First Round judging was based solely on the 300-word pitch, which is a lot harder to write than you think! Every word has to count and has to entice the reader to want to read the novel. Think of a back of the book blurb – if that doesn’t convince you to open the book in a few seconds, then you will set it aside and pick up the next book.

Here was my pitch:

THE LONELY AFFAIR OF JONATHAN BRADY

All it took was one look through a rearview mirror to convince Jonathan Brady that Cabrina Chaval loves him like no woman before has ever loved a man. Twenty-two years ago, during her debut in The Magic Flute, she picked him out of the audience. He was sixteen at the time, too young to understand the implications of that look – the way she poured out her heart, her soul to him. Now she’s contacting him again. This time, it’ll be different. This time, he’ll be ready to accept her outpouring of love.

Through a series of coincidences, Jonathan Brady, an economics professor who paints houses during the summer, convinces himself that Cabrina Chaval, a former opera singer and well-known socialite, is in love with him. This is reinforced when she sits beside him at a funeral and later invites him to paint her house. Because of her prominent position in society and since she’s still married, he accepts that their love must be kept secret. The only person Jonathan shares this secret with is his mother, who after taking him to see The Magic Flute, blackmailed him into breaking up with his girlfriend shortly before she died.

While recapturing the innocent love of two sixteen year olds and coming to terms with the incestuous love between a mother and child, Jonathan Brady passes through the five stages of love – from heightened awareness, to playful pursuit, to courtship and romance, to jealousy and suspicion, to reconciliation and acceptance – all unbeknown to Cabrina Chaval.

The Lonely Affair of Jonathan Brady is a story about love and betrayal, about second chances and believing in something with your entire heart despite all the evidence to the contrary.
* * *

Since entering the contest, while pitching the novel to agents, I have already amended this, by cutting out the line: "The only person...she died."

The Lonely Affair of Jonathan Brady, was an "almost finalist" for the 2008 Wisdom-Faulkner Novel contest.

***For 2011, another novel The Boy Who Shot Santa also made Round Two.

The judging for Round Two will be from February 25-March 14 and will be based on the 3000-5000 word excerpt, starting on page one of your novel. My excerpt is 4,089 words. Anything past that I felt was not an effective place to stop since it’s in the middle of a scene that's building to a climax. You have to end it at the right place, so the reader wants to know what’s going to happen next.  (** for 2012 I went further and it was 4,987 and that made it the the Quarterfinals; it was also heavily revised 4 more times!)

So do I, as I anxiously await for the results that could take me to Round Three. Not bad for an expat writer based in Borneo! But can The Lonely Affair of Jonathan Brady go all the way? For now I’m taking one round at a time and keeping my fingers crossed.

*Here are six lessons I learned from joining Amazon competition. 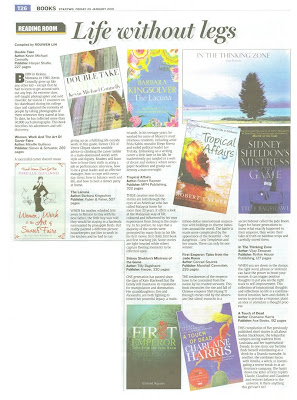 Beheaded on Road to Nationhood: Sarawak Reclaimed—Part I
Posted by Borneo Expat Writer at 12:59 AM No comments: