Esquire-Malaysia publishes “Seeing the Dead Man”, excerpt from A Perfect Day for an Expat Exit 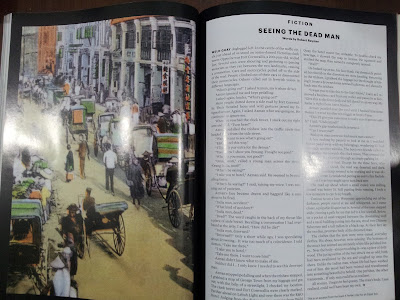 My short story, “Seeing the Dead Man”, an excerpt from my Penang-based novel A Perfect Day for an Expat Exit, has been published in the November 2015 issue of Esquire Malaysia.  *This is the ninth time, and the fourth story from three chapters (in four countries) that have been published from the former finalist, 2012, and short-list finalist, 2014, of the Faulkner-Wisdom Novel Awards.

*Originally I posted eight times in three countries but after double checking my records I discovered another story, under a different title, published in India.  (Australia, India, Malaysia, USA) 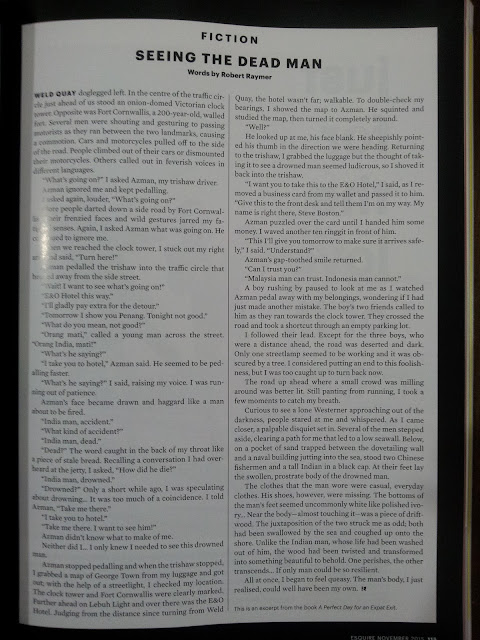 A Perfect Day for an Expat Exit (83,950 words)
Expatriates don’t always make smart decisions, especially if they own a gun.

“When living overseas as long as I have,” Michael Graver said from the com­forts of his decaying bungalow, “the question that you always have to ask yourself…is today a perfect day for an expat exit?”
Distraught over catching his wife with an ex-boyfriend, American business­man Steve Bos­ton flees from freezing Wisconsin to the tropical island of Penang, off the west coast of Malay­sia.  En route to the Eastern & Oriental Hotel, a colonial holdover, Boston comes to the aid of a mysterious Eura­sian whose com­plicated life has been made messier by her father’s body wash­ing ashore.  His death is linked to the enigmatic expatriate Michael Graver, who seems to know ev­ery­body’s personal secrets, and his anti-American, opium-addicted British wife, Amanda.
Until he met Graver, Boston merely thought of expatriates as some kind of my­stical creature – a shapeshifter capa­ble of abandoning one culture for another, often living in the sha­dows for the sake of survival; either hiding from their troubled past, seeking some self-indul­gent pleasure, or search­ing for a lost treasure.  Or a little of each as in Graver’s case.
Graver’s life begins to unravel as his past catches up with him.  With little left to live for ex­cept an elusive treasure buried by the Japanese at the end of World War Two, Graver gamely manipulates those around him, including Steve Boston who keeps finding him­self in the wrong place at the wrong time until he’s caught smack in the middle with a gun aimed at his head.

The follow up to this novel Girl in the Bathtub was a finalist in the 2015 Falkner Wisdom.

Posted by Borneo Expat Writer at 3:08 AM No comments: