Last Saturday was the “Turn your Personal Experiences into Published Articles” workshop in Kuching.  The turnout was about half of what we had in KK due to it being a last minute arrangement and too close to Christmas.  It also fell on finals day at Open University (and at least one other university); so many people who had expressed an interest couldn’t attend.  Those who did make it, including Charles from Miri, got a lot of writing done.  In fact Charles, who had attended the same workshop in KK in August, felt this one was better, maybe because he completed his first draft. 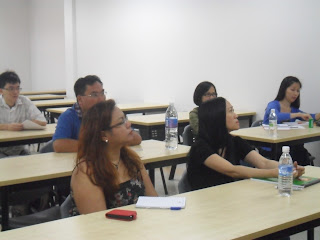 In KK, like many writers who only write on computer, he seemed to have trouble writing longhand.  Writing longhand, however, can be liberating.  You just keep going to the end instead of reworking the beginning over and over to perfection (some never get to the end and just give up on the story.)  At the workshop, after all the pre-writing prompting that we use on your story, by the time I let them write, after they had already been thinking about narrative for about an hour, they were raring to go.

Charles did bring me another story to edit, which is the best way to improve as a writer.  Get some direct feedback, some guidance to take your writing to the next level. Consider it an investment into your writing future.  When I began, I hired someone to critique my first 20 or so stories, and the better ones ended up in that original collection Lovers and Strangers (1993 Heinemann Asia).

Also attending the workshop was Allen, a photographer interested in travel writing, and Jasmine who has an interest in copywriting and who first came across me on a Malaysian airlines flight when she read my short story, “Merdeka Miracle” that I wrote with Lydia Teh and Tunku Halim.  Brenden, who’s studying in KL, was the youngest, who I first met at the 2009 MPH Short Story workshop in Kuching. 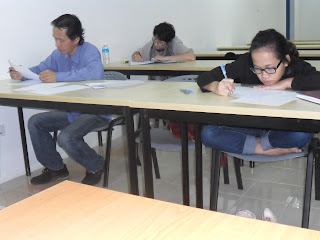 In the afternoon session we had Edrow who not only came with his 18-year-old daughter Joan, but had already completed a novel and had even been submitting it to UK agents!  After the workshop we talked about the whole finding-an-agent process and some alternatives.  It can take some time and plenty of rewrites.  Then there was my French friend Annie, who wrote a nonfiction manuscript about her experiences in Borneo, and writes a blog.  She has already blogged about the workshop, which she called “so refreshing; a tonic boost really.”

As I told the participants at the beginning of the workshop, you may know the beginning of your story as you begin to write today, but you may not know the full ending—where that story will take you years from now.  I used the “Mat Salleh” story from Lovers and Strangers Revisited as an example.  That story had its beginning when I visited my ex-in-laws in Malaysia for the first time while still living in the US.  I then took two correspondence courses offered by Writer’s Digest, one on the Short Story and the other, Advanced Short Story.

Getting some helpful feedback, I kept reworking the story, glad that I had kept a journal and took a lot of photographs.  When I moved to Malaysia, “Mat Salleh” became not only my first published short story in Malaysia, but also my first published short story in the UK—in My Weekly (they even ran the story with colour photos).  When it was published in Lovers and Strangers (1993 Heinemann Asia), I thought that was the end of the story, especially after a pair of publishers bought out the publisher and dropped its Writing in Asia series.

Twelve years later “Mat Salleh” and the revised collection, Lovers and Strangers Revisited (2005 Silverfish) was taught at USM in Penang.  The collection was republished a third time by MPH in 2008 and even went on to win the 2009 Popular Reader’s Choice award.  I thought that was the end of the story—a rather nice ending, too.  But Lovers and Strangers Revisited got translated into French as Trois Autres Malaisie.

Then I got an email last week and that old version of “Mat Salleh” in that original collection caught the eye of a film director at Ohio University in the US and they wanted to film the story.  After talking to the head of the film department, I suggested that for their purpose, the revised version of “Home for Hari Raya” might be a better choice, and they loved it.  So you never know the full ending of your story, where it’ll take you over the years and even decades, but the beginning you can start at a writing workshop.  You just need to get it started and see it through completion, draft after draft.

So, what have you written lately?  If you lack the discipline to start something new on your own, then sign up for one of my workshops.   Or any workshop that just happens to be in your area.   Good luck with your writing!


*Announcement latest workshops:  Writing Your Life Stories Workshop—Kuching! 23 June 2012 (with links to other workshops and writing tips!) and also a workshop KK on 17 June 2012!

I enjoyed the workshop with a better understanding. Thanks.

Glad you enjoyed it. I enjoy seeing how your writing is progressing. You have an interesting, heartfelt viewpoint that others can easily relate to. That's the benefit of pulling material out of your personal experiences. You get to recapture that mood, but also rethink whatever was going on--the motives, the logic, along with the clarify of distance.

Then if you want, you can put a spin on it and adapt it into fiction which is what I was able to do with Lovers and Strangers Revisited...by anchoring the stories in reality, as a starting point, I could then branch out in different directions by playing a little what if!