Creative Writing Workshop—three words that can send shivers down people’s spine!  Is it the word “creative” that scares you?  Often I’m told, “I’m not very creative,” and they cringe at the thought, as if being creative is an affliction akin to some tropical disease.  Or is it the thought of “writing” that's haunting you?  I know back in school the thought of writing was often equated with torture doled out by masochistic teachers bent on ruining our lives or at least killing a few of our precious weekends.  Then there’s the “work” part in workshop that doesn’t sound terribly exciting.  Who wants to pay good money to “work?”  There’s also the money issue.  In reality, though, who are you paying?

That’s right.  You’re paying yourself to show up for the workshop and invest your time to do something that you’ve been meaning to get around to for far too many years.  Ever since you’ve had that nagging idea that you want to write something, or that you have a story to tell.  It’s not necessarily that you want to be a writer, but just maybe you want to write about what happened to you a long time ago, something that changed you, made you a better person or a little wiser or a little more cautious or very grateful.  You've been thinking, if only I had the time.  The workshop will give you that time!

When people ask me, “Are you really going to make us work?”

Relax, we have pre-writing techniques that will help you think, help you to remember, like clustering or mind mapping, or free writing.  Pretty soon you’ll have ideas gushing out of you, long forgotten memories from your childhood or when you were an awkward teenager.  Soon you’ll be recalling events in your life that you either learned from, that helped get you through a difficult time in your life, or maybe even some hilarious mishap that wasn’t all that funny at the time, but now looking back, it cracks you up just thinking about it.  At the very least, you survived it, or maybe even had the last laugh!

Or maybe you shared a special moment, something spiritual or even miraculous that you want to share with your friends, family, even the world.  The Chicken Soup for the Soul series is filled with such stories that move us in so many ways.  Many of those stories were first published elsewhere, like in your local paper, under the first-person or a nostalgic section where you get to write about what happened in those days long gone by… 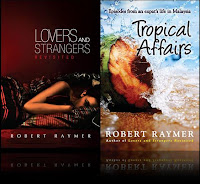 Have you ever done anything interesting?  That’s what got me writing my first narratives that make up Tropical Affairs: Episodes from an expat’s life in Malaysia.   I was lucky enough to take part in some movies while living in Penang (Hollywood came to me!), so I wrote about my involvement.  Basically I narrated what I did.  Unlike writing the short stories in Lovers and Strangers Revisited, there were no inventing characters, creating scenes, or any plot developments.  This was relatively easy, straight forward.

I then wrote about my experiences being a teacher, being a writer, being an expat, being myself, and at times, being out of luck—my misadventures!   Misadventures, I soon learned pays really well.  When things go wrong and you can laugh at yourself over it, and if others can laugh and learn from it too—now that’s marketable.  I even published an article for Quill “Making Money from Your Mis-adventures”

Of course, another fear we all risk at writing workshops is being “exposed”, found out that our grammar is horrible!  Welcome to the club!  Everyone present feels the same way.  You are not alone.  Far from it.  When I decided to become a writer, I naïvely thought that being a native speaker, with a university degree and a fairly decent grade point average and even getting some of my early work published, that grammar came second nature to me—like breathing; that I didn’t have to even think about it.  So I didn’t.

Then a well-meaning friend asked me if I’ve ever heard of the term “dangling modifier”?

Vaguely, I did, though I had no idea what it was.  Curious, I looked it up.  Oh my god, I’ve been breaking that rule all my life!  I flipped through the grammar section of one of my English text books and found all kinds of interesting terms and rules that I shamelessly broke, not knowing they were rules!  Infinitives, anyone?  Surely my teachers weren’t that bad, or maybe, I got a little careless over the years like bad posture.

Admitting my utter ignorance, I sucked it up and relearned some basic grammar.  You don’t have to know all the rules.  Grammarians don’t even agree on many of them.  Can you split an infinitive or not?  We can split an atom, but an infinite?  Well I do, when it serves my purpose.  Let the grammarians decide if I’m right or wrong.  All I want to do is tell my story.

For my Creative Writing Workshops, we don't focus on grammar.  That comes with revising, later. All I want to do is help you to write your own story, to help you get it out of your system onto paper, where you can play with it (I was going to say “work with it” but who wants to work?) and make it even better.  The more times you go over it, rewrite it, read it our loud, and keep smoothing out the wrinkles, the closer you'll be to getting it published—if you want to.  Not all workshop participants want to publish their work.  They get their pleasure out of merely writing it.

By the way, this is how all writing begins; a writer gets an idea, plays with it, writes it down, and voila!  They’ve written something.  It may not be a masterpiece (that may come later, after they revise it over and over, or get some editing help) but it’s a start, and getting started on your idea, your very own idea based on your very own personal experiences, is why you should attend a creative writing workshop.  Besides, you might even have some fun (and meet some kindred spirits who never realized writing was so much fun either).  You might even at admit, at least to yourself, that you actually like writing, and that you got something to show for the time (and money) spend at the workshop.  If not a complete first draft, something well underway that you can finish off when you get home. And if you sell it, you could recoup your investment!  Who knows, you might even turn your idea into a book!

And all those years, you thought writing was torture.  Shame on you!

*Announcement latest workshops:  Writing Your Life Stories Workshop—Kuching! 23 June 2012 (with links to other workshops and writing tips!) and also a workshop KK on 17 June 2012!