Review of Lovers and Strangers Revisited in The Star, 30 November 2008 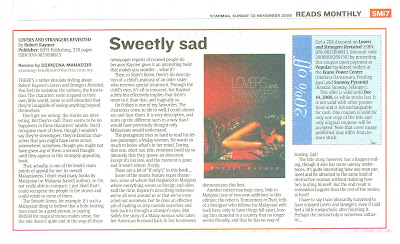 THERE’S a rather desolate feeling about Robert Raymer’s Lovers and Strangers Revisited. You feel the isolation, the sadness, the frustration. The characters seem trapped in their own little world, some so self-absorbed that they’re incapable of seeing anything beyond themselves.

Don’t get me wrong: the stories are interesting. But they’re sad! There seems to be no happiness in these characters’ worlds. You’d recognise most of them, though I wouldn’t say they’re stereotypes; they’re familiar characters that you might have come across somewhere, somehow, though you might not have given any of them a second thought until they appear in this strangely appealing book.

That, actually, is one of the book’s main points of appeal for me: its overall Malaysianess. I don’t read many books by Malaysian (or Malaysia-based) authors, so I’m not really able to compare; I just liked that I could recognise the people in the stories and could relate to some of them.

The Smooth Stones, for example. It’s such a Malaysian thing to believe that a holy-looking man must be a good person, so paying RM500 for magical stones makes sense. But the tale doesn’t quite end in the way all those newspaper reports of conned people do because Raymer gives it an interesting twist that makes you wonder ... what if?

Then, in Sister’s Room, there’s his description of a child’s jealousy of an older sister who receives special treatment. Through the child’s eyes, it’s all so innocent, but Raymer subtly but effectively implies that there’s more to it than that, and tragically so.

On Fridays is one of my favourites. The characters come to life to well, I could almost see and hear them. It is very descriptive, and sums up the different races in a way that I would have previously thought only Malaysians would understand.

The protagonist tries so hard to read his fellow passenger, a Malay women. He wants so much to know what’s in her mind. During that one, short taxi ride, emotions build up so intensely that they spawn an obsession. Except it’s too late, and the moment is gone, and it won’t return. If only.

Some of the stories feature expat characters, some of whom feel displaced in Malaysia where everything seems so foreign and alien. Half the time, Raymer’s describing behaviour we’ve all seen around us or that we’ve even acted out ourselves, but he does an effective job of making us step outside ourselves and look back in through a stranger’s eyes.

Mat Salleh, the story of a Malay woman who takes her American husband back to her hometown demonstrates this best.

Another mixed marriage story, Only in Malaysia (one of two new additions to this edition; the other is Transactions in Thai), tells of a foreigner who follows his Malaysian wife back here, only to have things fall apart, leaving him stranded in a country that no longer seems friendly, and that he has no way of leaving. Sad!

The title story, however, has a happier ending, though it also has some uneasy undertones. It’s quite interesting how one man can meet and be attracted to the same kind of destructive woman without realising how he’s hurting himself. But the end result is somewhat happier than the rest of the stories, at least!

I have to say I was pleasantly surprised to have enjoyed Lovers and Strangers, even if I did feel a little melancholic after finishing it. Perhaps the melancholy is somehow cathartic....

Beheaded on Road to Nationhood: Sarawak Reclaimed—Part I
Posted by Borneo Expat Writer at 5:01 AM